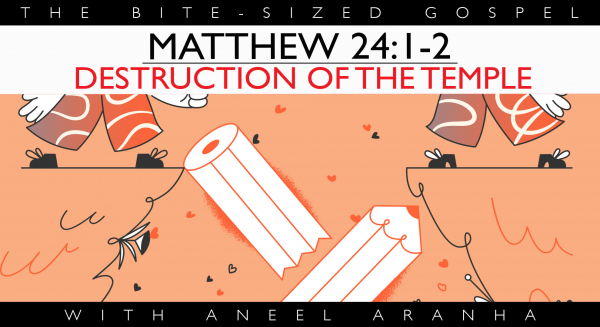 Jesus left the temple and was walking away when his disciples came up to him to call his attention to its buildings. “Do you see all these things?” he asked. “Truly I tell you, not one stone here will be left on another; every one will be thrown down.”

Among the many scary things that Jesus said, what he said in the passage we are reflecting upon today must have been one of the more terrifying ones. He and his disciples had gone to the temple to pray. This was known as Herod’s Temple, named after Herod the Great, and was an architectural wonder. As his disciples marveled at how beautiful it was, Jesus spoke of its imminent destruction. It was as though he was telling them: “Oh, yes, it’s beautiful. It took years to build it and make it this beautiful. But even this will go!”

Immediately they wanted to know when this would happen. And what would be the signs that preceded it? And although Jesus did answer the question — in his own fashion — they didn’t ask the important question. This was: “Why? Why would this happen? Why would God allow the destruction of the temple in which people prayed to him?” Part of the reason is to shock people to their senses. Although history should have taught us that nothing lasts forever — entire civilizations have been wiped out— we still believe in the permanence of things and therefore become complacent.

Only when such events happen do we realize how nothing is permanent. We become aware of the fragility of structures that seem so solid. We are also made aware of our own mortality. Consequently, we turn toward God. I remember reading about how, after the 9/11 terrorist attacks in the US, churches were packed to overflowing. People realized how easily and suddenly death could strike and how vital it was for them to prepare for what was to follow. But wickedness is resilient, and it didn’t take long for the churches to start emptying again.

So what is God to do? He loves us too much to allow us to perish for eternity, so he allows bad things to happen. He doesn’t make them happen; he permits them to happen — there is a significant difference. And, therefore, the things that Jesus warns about — wars and insurrections, earthquakes and famines and plagues, other dreadful portents and signs — these are indications of the end times. But more importantly, they are wake-up calls to humanity. As C.S. Lewis said, “God whispers to us in our pleasures, speaks in our conscience, but shouts in our pains: it is his megaphone to rouse a deaf world.”

I so wish we could hear better. Don’t you?